PPX announces the results of the Igor Pre-Feasibility Study

Vancouver, British Columbia – December 4, 2018 – PPX Mining Corp. (the “Company” or “PPX”) is pleased to announce that it has received the results of an independent Pre-Feasibility Study (“PFS”) for an integrated underground mine and gold-silver recovery plant at the Company’s Igor Project in Northern Peru.  The PFS was prepared by Mine Development Associates (“MDA”) of Reno, Nevada in accordance with the requirements of Canadian National Instrument 43-101 “Standards of Disclosure for Mineral Projects” (NI 43-101). Unless otherwise noted, the results below are expressed in US dollars, Canadian dollars are converted at an exchange ratio of 1.33.

Highlights of the PFS

“PPX is excited to complete this important step in advancing the Igor Project and Mina Callanquitas towards production” said Brian J. Maher, President and CEO of PPX Mining. “The low cash costs, rapid payback and strong base-case NPV can be attributed to PPX using low-cost heap leach precious metal recovery. We view the PFS as a base-case road map that outlines the initial production plan for the Igor Project with multiple actionable opportunities to expand gold and silver production and cash flow in the near term.”

The Callanquitas underground mine is fully permitted and has been operating for over 18 months in a test mining and bulk sampling mode.  The heap leach processing facility has nearly completed the permitting process, needing only the final Permit to Initiate Operations (“F2”) to begin operations.  This permit is expected in December, 2018.

With the completion of the PFS, the Company is prepared to advance the Igor project into production as outlined in the PFS. PPX looks forward to completing our transition from developer to producer and becoming Peru’s newest gold and silver producer.

The PFS base case uses a gold price assumption of $1,250/oz and a silver price assumption of $16.50/oz, and generates a discounted pre-tax net cash flow of $37.7M (5%) over a seven-year mine life.  PFS results are disclosed on a Pre-tax and Post-tax basis. Key economic metrics, with the base case highlighted are summarized below. 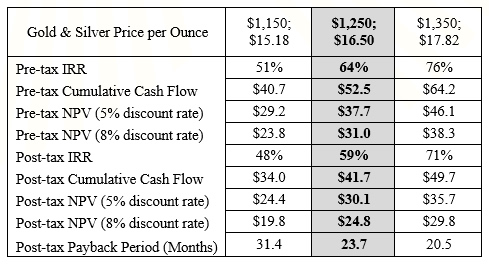 Oxide ore will be obtained from Mina Callanquitas underground workings accessed by a series of ramps and development drifts.  Ore will be stoped using mechanized cut and fill with broken ore transported to the surface via the ramp system.  The PFS assumes that the mine will utilize a contract miner to provide equipment and personnel for underground mining. Broken ore will be transported by 20-tonne trucks to the processing plant where the ore will be crushed, screened and agglomerated.  Crushed ore will be stacked on heap leach pads at an average rate of 430 tonnes per day at full production. Pregnant solutions from the heap leach pads will be treated in a Merrill Crowe processing plant in order to maximize silver recovery.  Gold and silver recoveries have been estimated at 80% and 33% for the purposes of this PFS.  The processing facility will produce gold-silver doré which will be sold for further refining. 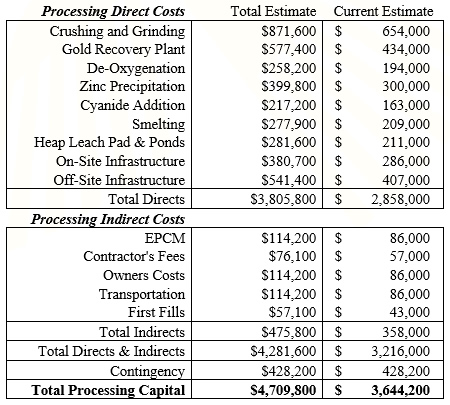 Mining Capital is mostly capitalized development over the life of the mine and adjustments (payments) to the mining contractor.  Salvage at the end of mine life has been estimated at $908,000.

MDA developed the update mineral resource estimate for the Igor Project that has been utilized in the PFS in accordance with the requirements of Canadian National Instrument 43-101 “Standards for the Disclosure of Mineral Projects”.  The resource estimate is restricted to the Callanquitas gold and silver deposit within the Igor Project.  Data from a total of 93 diamond core drill holes totaling 23,264 metres in length and 1,126 underground channel samples were used to prepare the resource estimate.  The estimation methodology included establishing separate domains for higher and lower grade portions of the Callanquitas deposit, utilizing geologic criteria including structure to constrain resources.  Individual model blocks are 0.5m x 2.0m x 2.5m in order to mimic the proposed and current mining method.  The Inverse-Distance Cubed (“ID3”) method was used to estimate sample data into the block model.  As-built surveys of underground workings were used to eliminate resource blocks that have already been mined as of October, 2018.  A gold equivalent (“AuEq”) cutoff grade of 2.0 gpt AuEq was used to define the reported Mineral Resources.  Mineral resources are not mineral reserves and do not have demonstrated economic viability.  There is no certainty that all or any part of the mineral resource will be converted into mineral reserves.  The results of the mineral resource estimate are summarized below.

Proven and Probable Mineral Reserves were estimated by Joseph B. Seamons, P.E. of MDA, in accordance with the requirements of Canadian National Instrument 43-101.  Proven and Probable reserves were estimated based on a $1,250 per ounce gold price and $16.50 per ounce silver price.  The reserves estimate utilized Deswik™ Stope Optimizer Software (Deswik.SO™) to define mineable shapes based on a 2.5 gpt AuEq cutoff grade.

Dilution of 10% (tonnage) was added.  Gold and silver grades of the dilution tonnes were based on a 0.5m shell outside of the mineable stope shapes.  Measured and Indicated grades within the dilution shell were calculated for each level, and the metal content of the dilution was reduced by 50% to represent waste due to mucking on top of fill.  A mining extraction of 95% was used to represent a 5% ore loss.

Five sets of metallurgical testing have been performed on samples from the Callanquitas deposit.  The first testing was done during 2014 and 2015 and consisted of bottle roll and agitated leach tests.  The results showed that Callanquitas gold and silver mineralization is amenable to CN extraction.  In 2015, two sets of samples were subjected to column leach testing over a variety of leach times and utilizing agglomeration and non-agglomerated ore samples.  The best results from the 2015 column leach came from ore crushed to ½ inch size with the fines agglomerated.  A final set of column leach tests were performed in 2017 with similar results, the best precious metal recoveries occurred in samples crushed to ½ inch size.  Gold dissolution was rapid in the 2017 test work, with most of the gold being extracted within the first five days of leaching.  The opposite was true for silver, with dissolution being slow and continuing to increase throughout the 35-day leach cycle.  Based on the full body of test work completed to date, the process design in the PFS considers gold recovery of 80% and silver recovery of 33% over the full leach cycle.  The test work shows that silver recovery can be variable and additional testing is recommended to understand the source of this variability.  Metallurgical test work is summarized below: 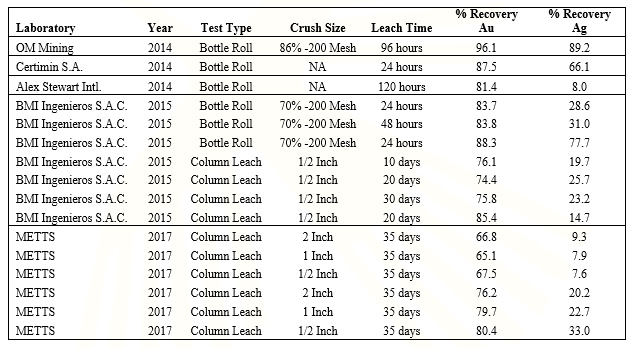 The following people have reviewed this press release and all are independent Qualified Persons as defined by NI 43-101 in their specified areas of expertise:

Disclosure related to mining and Reserve estimation:  Joseph B. Seamons, P.E. of MDA,

All scientific and technical information in this press release not within the areas of expertise described above has been reviewed and approved by Quentin J. Browne, P.Geo., Independent Consulting Geologist to PPX Mining Corp., who is a qualified person under the definitions established by National Instrument 43-101.

PPX Mining Corp. (TSX.V: PPX.V, SSE: PPX, BVL: PPX) is a Canadian-based exploration and development company with assets in northern Peru.  Igor, the Company’s 100%-owned flagship gold and silver project, is located in the prolific Northern Peru gold belt in eastern La Libertad Department.  PPX is developing the Callanquitas Mine and heap leach facility to exploit high grade, underground-minable gold and silver ore.  Based on the Company’s Prefeasibility Study, PPX expects the Callanquitas mine to produce up to 26,000 AuEq ounces per year over a seven-year mine life at cash cost of less than US$610/AuEq ounce.  Simultaneously, PPX is accelerating its exploration program at Igor in order to fully evaluate the resource potential of the entire Igor project area.  The Callanquitas structure is open along strike and at depth, parallel structures are unexplored.  New discoveries at Portachuelos, coupled with the Domo and Tesoros exploration targets, emphasize that the Igor Project is evolving into a district-scale project with multiple deposits and mineralized zones.

On behalf of the Board of Directors
Brian J. Maher
President and Chief Executive Officer

Cautionary Statement:
Neither the TSX Venture Exchange nor its Regulation Services Provider (as that term is defined in the policies of the TSX Venture Exchange) accepts responsibility for the adequacy or accuracy of this release. Certain disclosure in this release, may constitute “forward-looking statements” within the meaning of the United States Private Securities Litigation Reform Act of 1995 and Canadian securities legislation. In making the forward-looking statements in this release, the Company has applied certain factors and assumptions that the Company believes are reasonable. However, the forward-looking statements in this release are subject to numerous risks, uncertainties and other factors that may cause future results to differ materially from those expressed or implied in such forward-looking statements. Such uncertainties and risks are described from time to time in the Company’s filings with the appropriate securities commissions, and may include, among others, market conditions, delays in obtaining or failure to obtain required regulatory approvals or financing, fluctuating metal prices, the possibility of project cost overruns, mechanical failure, unavailability of parts and supplies, labour disturbances, interruption in transportation or utilities, adverse weather conditions, and unanticipated costs and expenses, variations in the cost of energy or materials or supplies or environmental impacts on operations. There can be no assurance that such statements will prove to be accurate, and actual results and future events could differ materially from those anticipated in such statements. Readers are cautioned not to place undue reliance on forward-looking statements. The Company does not intend, and expressly disclaims any intention or obligation to, update or revise any forward-looking statements whether as a result of new information, future events or otherwise, except as required by law.